Either the Obstacle Wins or You Do

We all love rooting for the underdog. That person or team that defies the odds and finds a way to win.

My personal favorite example is the 1980 USA Olympic hockey team that defeated the Soviet Union 4–3 during the medal round of the men’s hockey tournament. As the four-time defending gold medalist, the Soviet Union was heavily favored to win. Now, the “Miracle on Ice” is forever etched in the memories of sports fans as one of the greatest sporting events of all-time.

While it’s awesome to bring home the gold medal, overcoming challenges and beating the odds isn’t always about coming in first place. It’s about the will to win and having the determination to succeed despite the obstacles in your path.

An outstanding example of this is Alicia Follmar. As a runner for Stanford, she accidentally tripped just over a lap into a race and was trampled by other runners. Hurt and seemingly out of contention, most people would of simply given up.  Alicia got up and finished the race in 3rd place.

You can read about the event here > stanfordmag/indomitable

Overcoming adversity is one of the true measures of a persons character. If you have not endured adversity and have somehow taken the perfect path to success then good for you.

And potentially bad for you too…

When obstacles block your path will you have the resiliency, grit and determination to overcome them and succeed?

The ability to overcome adversity is a common characteristic of high-achievers. Whereas the average person’s progress is hindered (or halted) by adversity, high-achiever’s view the same challenges as obstacles to overcome on the way to their goal.

Ultimately, the underdog wins because they rise to the challenge and defeat it.

Some say these high-achievers are simply programmed differently. I say we’re all capable of programming ourselves to achieve greater results, be it on the playing field or in our work.

One thing is certain…

Either the obstacle wins, or you do. 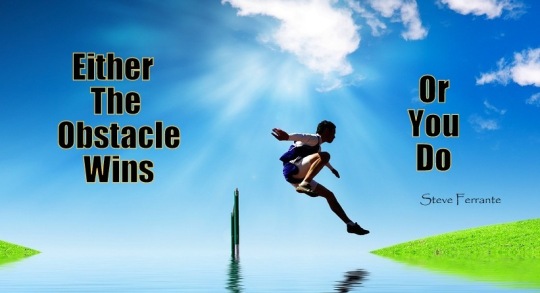 Is serving customers exceptionally well a true priority at your business?

Being Unremarkable is Bad for Business

Comments on: "Either the Obstacle Wins or You Do" (1)

What do you think? Cancel reply