Recently I came across this cartoon… 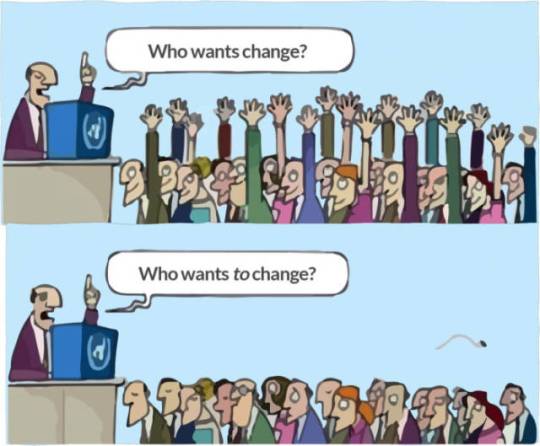 I’m not sure who the artist is but the depiction bears an uncanny resemblance to a speaking engagement I had a few years back. I was speaking at an automotive industry conference at the beautiful Baltimore Marriott Waterfront. There were about 1500 people in the audience. I was on stage with a movie theater size screen behind me. About 5 minutes into my presentation, I put this slide up on the screen..

The sheer amount of people and the rally environment of the conference made this the loudest response I’ve ever heard in the many times I’ve used this slide as they seemingly all cheered loudly, many raising their arms/fists to demonstrate their support. After all, who doesn’t want to win?

Then, I said “Great! What are you doing about it?” Like someone pulled the fun plug, the cheers faded away, the arms went down, and the place fell nearly silent as I switched to this quote from Coach Paul Bear Bryant..

Having trained thousands of folks in dozens of businesses, I’m convinced most people want to be better. They want to win. However, few people turn that desire into action and make the necessary changes to succeed at at a higher level. I believe this is your single biggest advantage for success.

When I talk with clients, and people in general, about achieving higher levels of success (“Pinnacle Performance”) they all want it. But, when we address the changes it’s going to take then I often receive halfhearted commitments or excuses. Finally, I discover who I’m really dealing with in the actions they take or, most often, do not take.

Ever heard of a New Year resolution? The research studies all conclude the same findings, approximately 80% of people that make a New Year resolution do not keep it. There are a number of reasons for this but they are all driven by self-discipline and a commitment to change.

Now this ‘change’ principle is certainly not the latest in professional development advice. In fact, English literary James Allen published this famous quote in one of the most popular self-help books of all time, As a Man Thinketh, way back in 1902:

“Men are anxious to improve their circumstances, but are unwilling to improve themselves; they therefore remain bound.” — James Allen

Improvement, by design, is change. When you effectively apply this change principle to a organizations culture, where everyone is committed to continuous improvement, it is a very strong competitive advantage.

From 2007-2012 I conducted my “Strong Selling In A Weak Economy” seminar to dozens of organizations and associations. A popular program at the time, I would hear from many business owners on how they were trying to “weather the storm” and assuming a “bunker mentality” trying to make it through until the economy improved. I would ask how this was working for them and their business. It was not.

They all wanted to be better, yet they weren’t really doing anything about it other than trying to survive.  I would ask, “now that the economy has changed, what have you changed?” In most cases, nothing. I would point out how Einstein called this the definition of insanity; “doing the same thing and hoping for a different result”.

So if positive change creates positive results then why don’t most people change? Here’s my top 3 reasons:

There is no glitch in the Matrix.. That curious question mark at the end of this common statement is on purpose. The reality is change is only hard when you don’t know what and how to change. If you’ve been winging it, as a example, then “yes” change is hard. If you’re following a proven path then change is not easy, it’s just less hard, much less.

For instance, if you do not play the piano but were committed to playing really well, you wouldn’t buy a piano and just wing it. You would take lessons from a professional piano teacher who would help you change, with patience and practice, from an amateur to a professional yourself.

You would recognize that in the beginning of your piano playing, like anything new, you would not be good and, very likely, would just plain stink. You would understand that this phase is a part of the learning curve on your way to mastering your skill.

If you understood all that and did persevere, you would be in the minority as the majority that try new things don’t succeed at them, much less master them. For them change is too hard. It’s much easier to retreat back to the comfort zone, so that’s where they end up.

You gain strength, courage and confidence by every experience in which you really stop to look fear in the face. You are able to say to yourself, ‘I have lived through this horror. I can take the next thing that comes along.’ You must do the thing you think you cannot do. – Eleanor Roosevelt

If you’re looking to lose weight then it only makes sense that you would not want to frequent the local ice cream parlor or pizza pad. If you want to succeed in your role, you need to take the same approach. Build a supporting cast by surrounding yourself with folks that are committed to the same change (or changes) you’re trying to make. Distance yourself from the naysayers and surround yourself with winners. 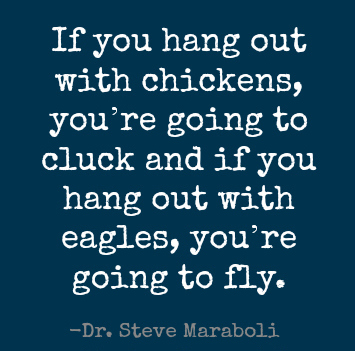 For businesses, this is a culture issue. If a company is looking to achieve higher levels of success (a change) but their people are looking to stay the same (no change) then, ultimately, the company will not achieve its goal.

Leaders must continually communicate the case for positive change and how it is ‘good for business’. They must create a culture that embraces change and strategically replace those on the team that are stuck in their ways and refuse to change.

Statistically speaking, there will be a great number of folks that read this and insist it’s not really about them. They are the ones that want change. They’ve just been so busy managing their current affairs that they haven’t really had the time to focus on all this change stuff.

Now, for some of these folks, it’s just not that important. They’re simply not that committed. Their goals are really just wishes. If they happen, great! If they don’t, that’s okay.

For the others that say, “Heck no, it’s really important”, it’s often a matter of procrastination.

I hope this article has changed you, even if just a little, to be better than before you read it!

Steve Ferrante is the Grand PooBah & Trainer of Champions of Sale Away LLC.  Through Pinnacle Performance Sales, Customer Service and Winning Team Culture training, speaking and professional development services, Steve creates positive change for success-driven businesses throughout North America. For detailed information visit Sale Away. Steve can be reached directly at 866-721-6086 ext. 701 or via email at steve@saleawayllc.com